Cavitation As Cause Of Ultrasonic Cleaning

The implosion of gas bubbles at the base of ultrasonic washing

When turbulence is created in a liquid, bubbles (cavities) containing high pressure vapour form which due to the same turbulence immediately implode, freeing the energy in the form of vapour pressure.

The mechanical vibrations produced by the PZT elements affixed to the walls of the tank generate waves in the liquid which, alternating from a compression phase to a decompression phase, produce very strong agitation.

As a consequence, there is a continuous formation of cavitation bubbles which implode, developing a pressure which has been measured at approximately 1,000 bar.

The compression and decompression effect is greater and the energy it develops is more powerful.

Any foreign matter on the surface of a part immersed in liquid is broken down, dissolved and removed.

In the field of naval engineering this phenomenon of cavitation is well-known and highly feared, precisely because of the corrosion which develops on the propellers from the cavitation generated by the violent swirling of the propellers as they turn, meaning special measures must be taken.

In our case, however, cavitation plays an essential role in the elimination of surface dirt that collects in the innermost parts of an object. 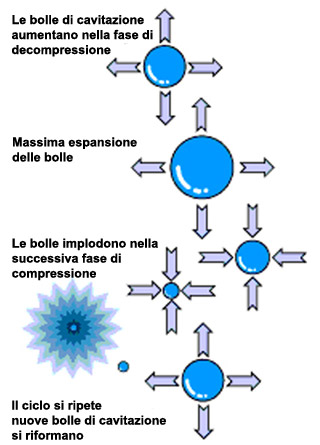